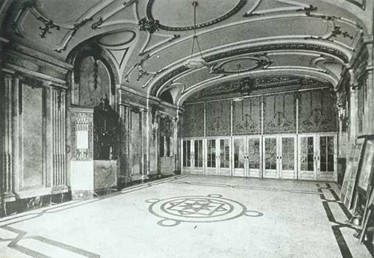 Vintage photo of the lobby of the Palace Theatre
The Palace Theatre is a Broadway Theatre at 1564 Broadway, facing Times Square, in New York City. In 1913, producers Martin Beck, B.F. Keith, and E.F. Albee opened the Palace, a premiere vaudeville theatre that became synonymous with show business excellence and attracted legendary performers including Fanny Brice, Bob Hope and Judy Garland. It was most successful in the 1910s and 1920s. The venue suffered from vaudeville’s Depression-era decline and became a movie house under RKO Theatres in the 1930s to the 1950s.
The Nederlander Organization purchased, renovated and restored the Palace back to a legitimate theatre in 1966. Neil Simon’s Sweet Charity was the first production in 1966. La Cage aux Folles (1983) starring Gene Barry and George Hearn was a successful production there. The Theatre closed for an extensive renovation from 1987 to 1991, when the original building was partly demolished and replaced with the DoubleTree Suites Times Square Hotel; the Theatre was reopened within the DoubleTree in 1991. The Theatre had 1,743 seats[a] across three levels as of 2018. Other successful shows performed here were: Beauty and the Beast (1994) starring Susan Egan and Terrence Mann; Aida (2000) starring Heather Headley and Adam Pascal; Legally Blonde: The Musical (2007) starring Laura Bell Bundy, Christian Borle, Richard Blake and Orfeh; Priscilla, Queen of the Desert (2011) starring Will Swenson, Nick Adams; and An American in Paris (2015) starring Robert Fairchild and Leanne Cope. 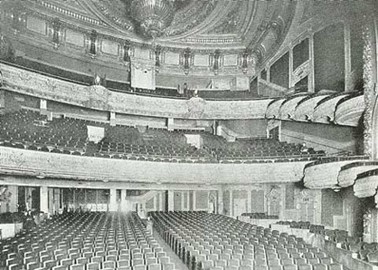 Vintage photo of the audience seating at the Palace Theatre 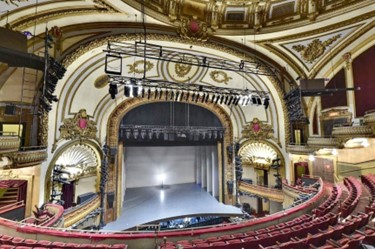 View of stage from balcony at the Palace Theatre
The modern Palace Theatre consists of a three-level auditorium at 47th Street, which is a New York City designated landmark. The auditorium contains ornately-designed plasterwork, boxes on the side walls, and two balcony levels that slope downward toward the stage. When it opened, the Theatre was accompanied by an 11- or 12-story office wing facing Broadway. 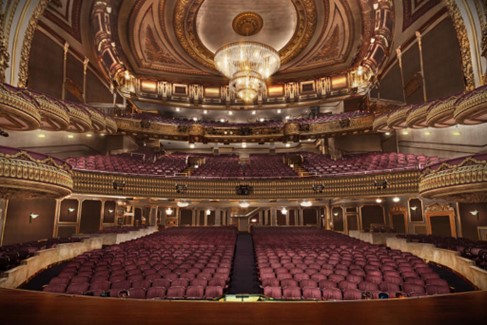 View of the audience seating from the Palace stage
In recent years, it has hosted long-running Disney stage epics and other hit musicals. The final show to be produced in the theatre in its original location was the musical SpongeBob SquarePants which closed on September 15, 2018, starring Ethan Slater, Danny Skinner and Lilli Cooper. In a $2.4 billion project, the theatre was raised 30 feet in early 2022 to make room for multi-level shopping and arcades inserted at street level. The hotel built on top of the theatre will be expanded to 663 rooms, a restaurant and nightclub. A huge wrap-around advertising screen will cover the building. The renovation is scheduled to be completed in 2023. 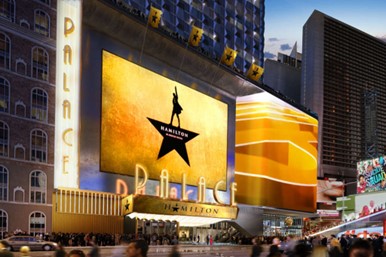 Work is progressing “full steam” at L&L Holding Company’s TSX Broadway, the 46-story, mixed-use tower at Seventh Avenue and West 47th Street according to L&L co-principal and managing director David Orowitz. A major milestone was reached last week with completion of the intricate lift of the historic Palace Theatre to 30 feet above street level.