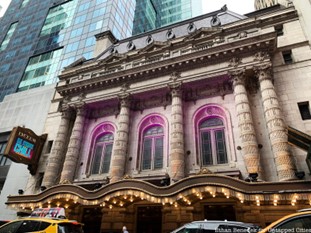 Street view of the Lyceum Theatre

The Lyceum Theatre is Broadway’s oldest and most historic theatre. It opened in 1903 with its first show, The Admirable Crichton, and is still in operation today, currently running the show Be More Chill.

The Lyceum was built by theatrical producer David Frohman and his brother Charles. David lived in an apartment above the auditorium. The penthouse apartment had a small view of the stage from which Frohman would wave a white handkerchief to signal to his wife, Margaret Illington, that she was overacting. The theatre was designed in a Beaux-Arts style as many theatres of its era were. The design features a gray limestone facade, fluted columns, large French windows, a mansard roof, and a wide frieze engraved with theatrical masks.

The theatre has been owned by the Schubert organization since 1954 and was the first Broadway theatre to be granted landmark status in 1974. The Lyceum Theatre is one of Broadway’s few theatres to operate under its original name. Other notable productions to premiere at the Lyceum include Liza with a Z (1972), Steel Magnolias (2005) and Oh, Hello (2017).

The Hudson Theatre is among the oldest Broadway Theatres in the city, opening in 1903. It was built by Henry B. Harris who later tragically died in the 1912 sinking of the Titanic. Its first production was Cousin Kate and it is currently home to the play Burn This. At the time of its construction, the theatre had a 100-foot long lobby and a backlit stained glass ceiling made by Tiffany & Co. The interior of the theatre also features classical plaster ornamentation and concealed lighting effects.

Though it currently operates as a theatre as it was originally intended, the building has served several purposes over the years. In the 1930s and 40s, the Hudson was a CBS radio studio. From 1953-1959 the building was home to The Tonight Show with Steve Allen and later Jack Paar. 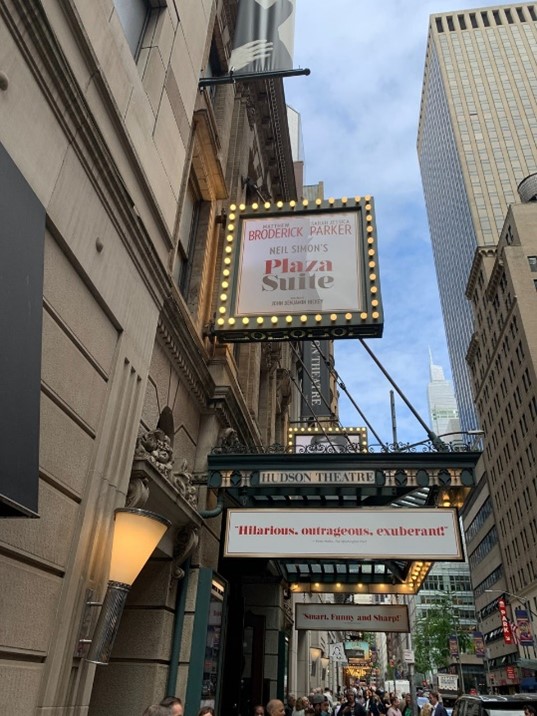 Street view of the Hudson Theatre 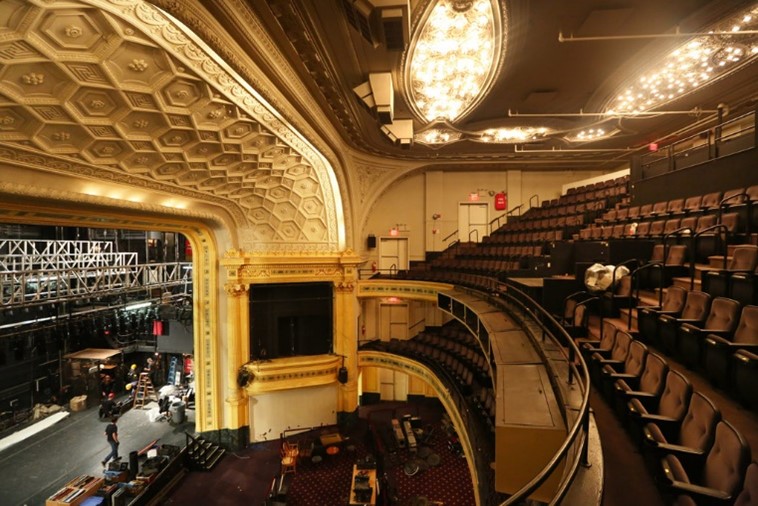 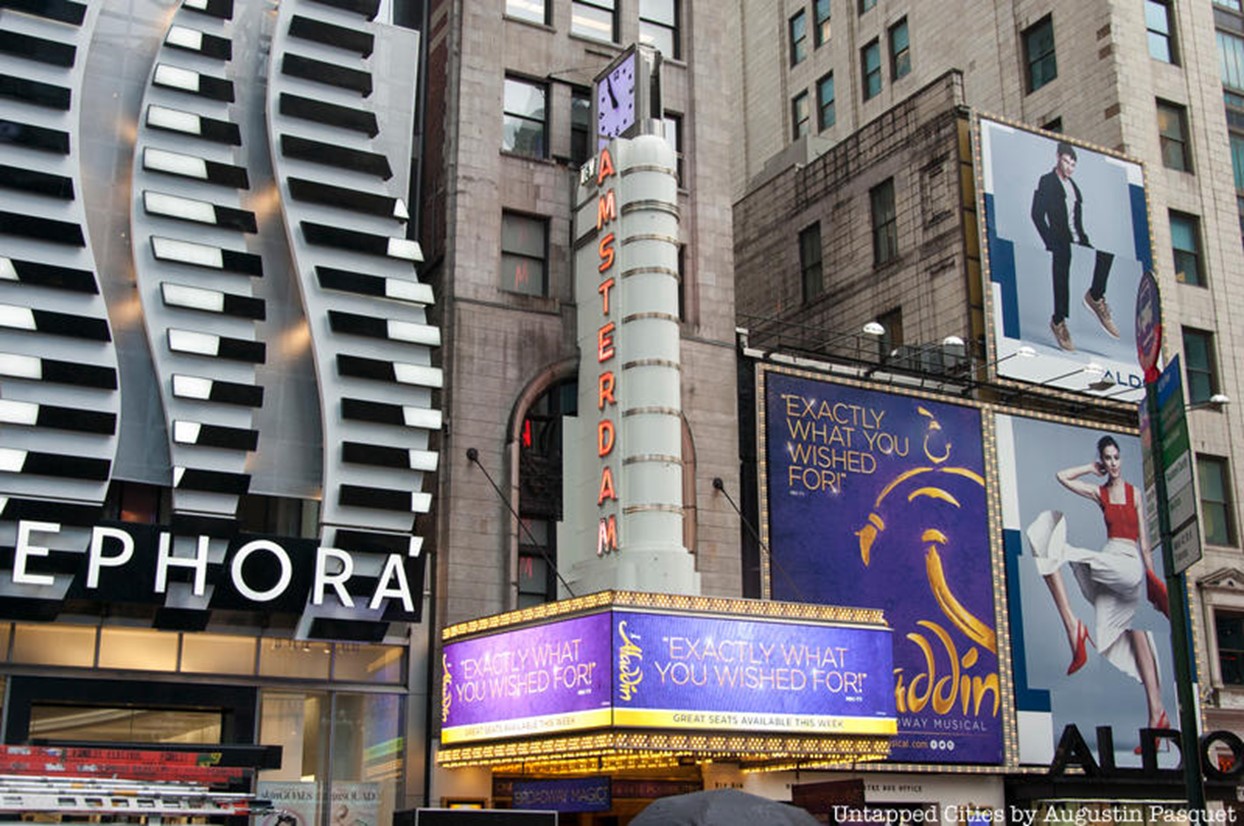 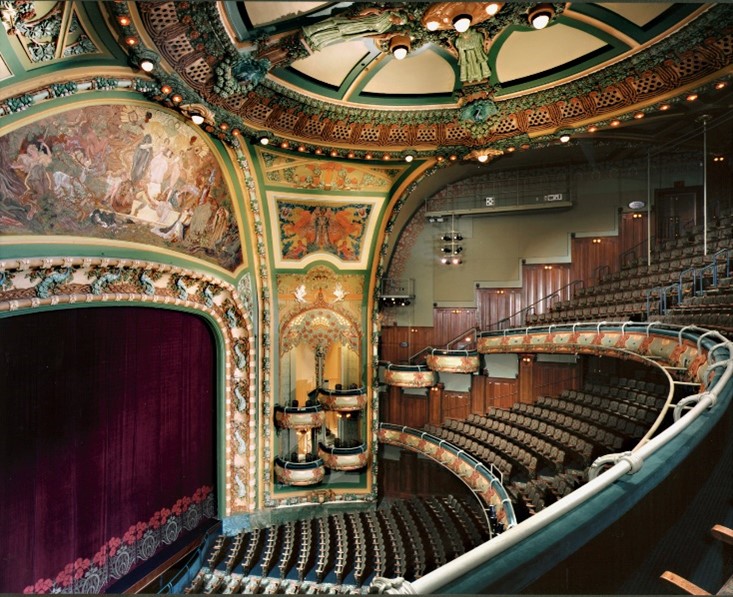 Built in 1903 to incorporate two performance spaces within an office tower, the New Amsterdam Theatre is a rare example of Art Nouveau architecture in New York, meant to express the spirit of drama. Its first production was Shakespeare’s A Midsummer Night’s Dream.

The New Amsterdam Theatre was the home of the Ziegfeld Follies from 1913 to 1927. It was first used as a movie theater during the Great Depression in 1937, when many theatres had to resort to showing films in order to stay in business. It remained a movie theater until 1985 when the building was obtained by Disney Theatrical Production as the flagship theatre for Walt Disney productions on Broadway. Its current production is Disney’s Aladdinwhich opened in 2014.

The Belasco Theatre, which opened in 1907, was intended to house “living room plays” according to its namesake David Belasco, theatrical producer, director, and playwright. Therefore, the audience seats are intended to be as close to the actors as possible. The building’s design displays a fusion of Churrigueresque, Spanish Renaissance, Moorish, and Gothic architecture. Much of its original details have survived including its striking dome ceiling.

Today, the theatre seats just over 1,000. In its early days, the theatre was among the more advanced with its complex lighting board, even in the early days of electricity. The theatre is currently home to Network, starring Tony Award winner Bryan Cranston. 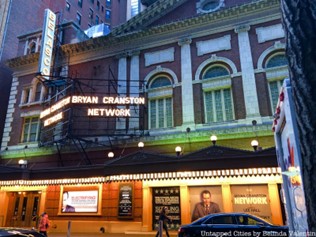 Current street view of the Belasco 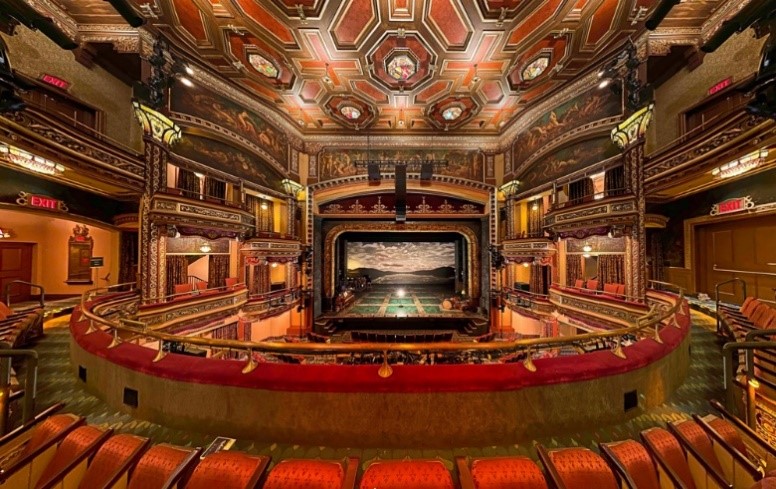 Interior view of the Belasco 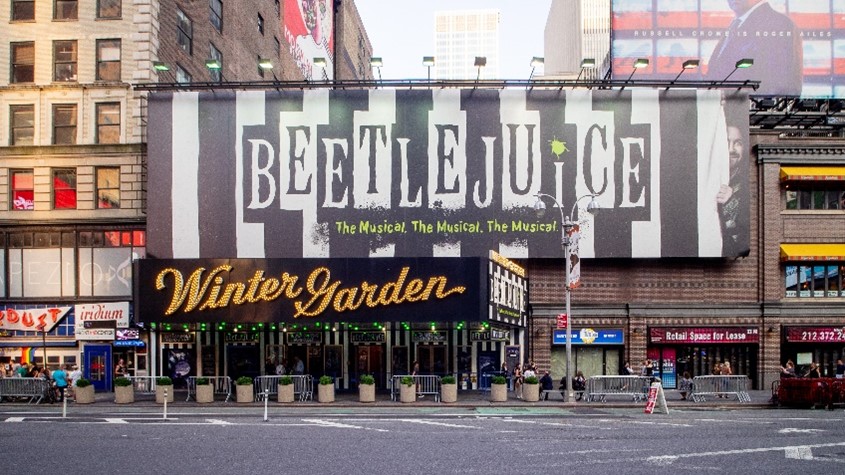 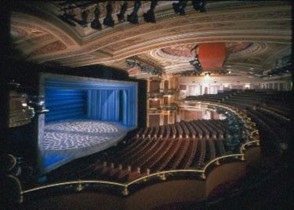 The Winter Garden Theatre was originally the American Horse Exchange Building, built in 1896 by William K. Vanderbilt, when Times Square (then known as Longacre Square) was the center of the horse and carriage industry. In 1911, the Shuberts purchased the building. The Shuberts had architect William Albert Swasey convert the building into a theatre, and it was later remodeled in 1922, with pieces of the original structure remaining. Its first show was a production of La Belle Paree starring Al Jolson, who rose to stardom after that production. The Winter Garden is currently home to Beetlejuice.

The theatre’s longest-running production was Cats, which ran from 1982 until 2000, making it the fourth longest-running Broadway show of all time. The auditorium was remodeled and essentially gutted in 1982 specifically for Cats to accommodate the production’s junkyard setting. When Cats closed in 2000, the theatre was restored to its original 1920s modeling which features a stage wider than most Broadway stages, and a relatively low proscenium arch. Notable productions to premiere at the Winter Garden Theatre include West Side Story (1957), Funny Girl (1964), Gypsy (1974), and Mamma Mia! (2001).

The Helen Hayes Theatre originally opened as the Little Theatre in 1912. With only 599 seats, it is the smallest theatre on Broadway. The first show to run in the theatre was a production of The Pigeon. The building was sold to The New York Times in 1931 and converted into a conference hall. In the 1950s, it was used as a recording studio for television and radio.

In 1983, the building was brought back as a theatre by producers Martin Markinson and Donald Tick and renamed for Helen Hayes, known as the First Lady of the American Theatre. The theatre bears a combination of formal Classical and Beaux-Arts design. Currently running at the Helen Hayes Theatre is What the Constitution Means to Me. Other notable productions include Romance/Romance (1988), Rock of Ages (2011), and The Humans (2016). 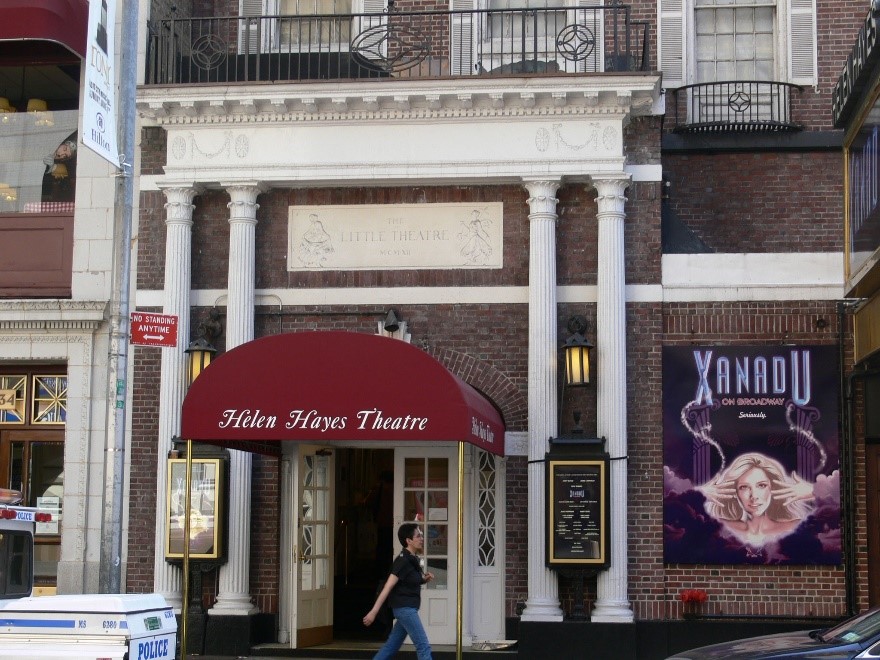 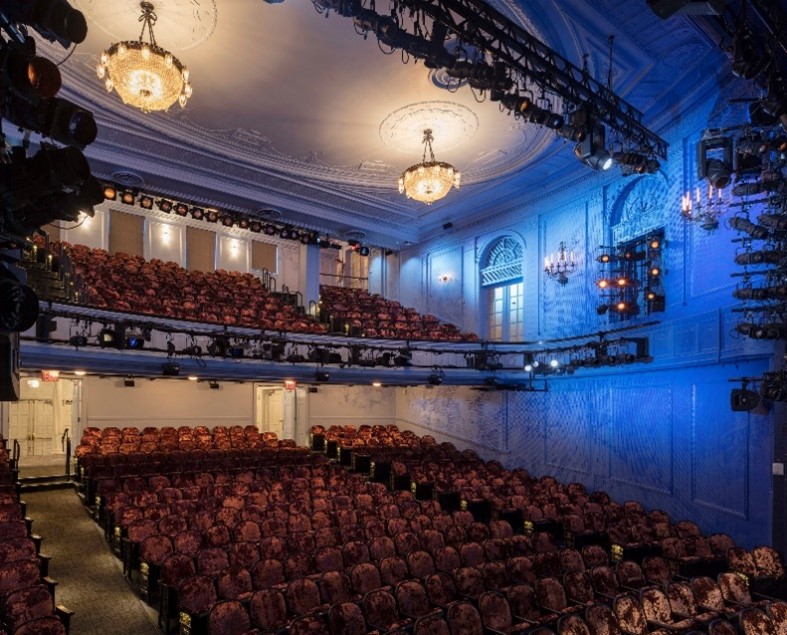 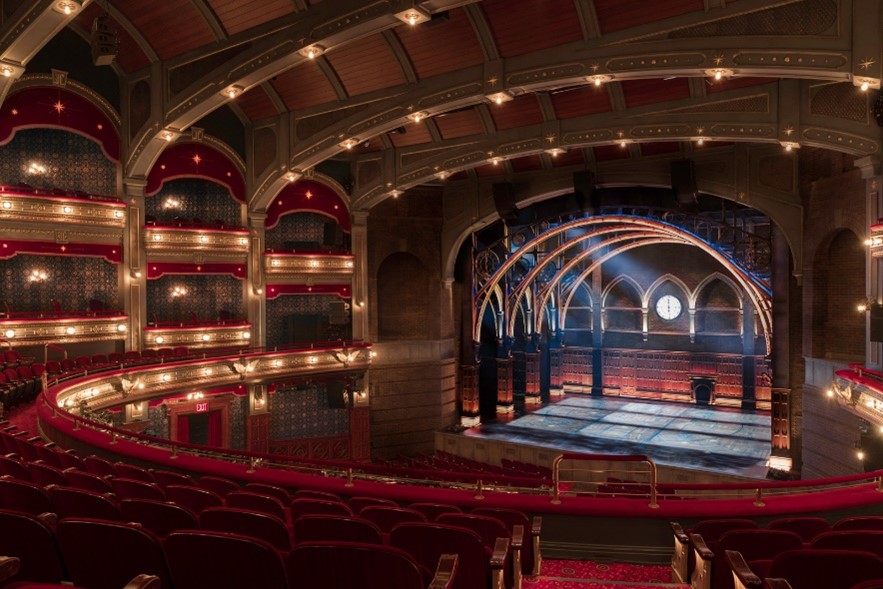 Interior view of the Lyric Theatre stage from the balcony 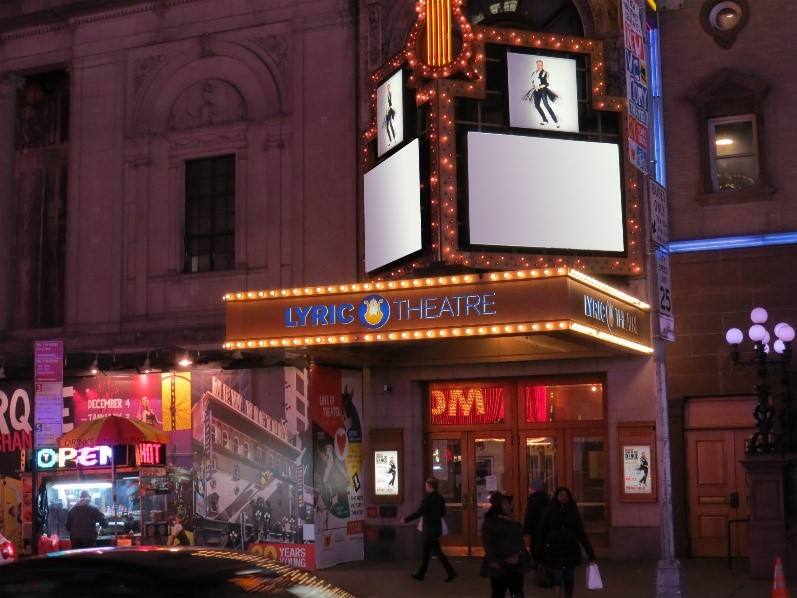 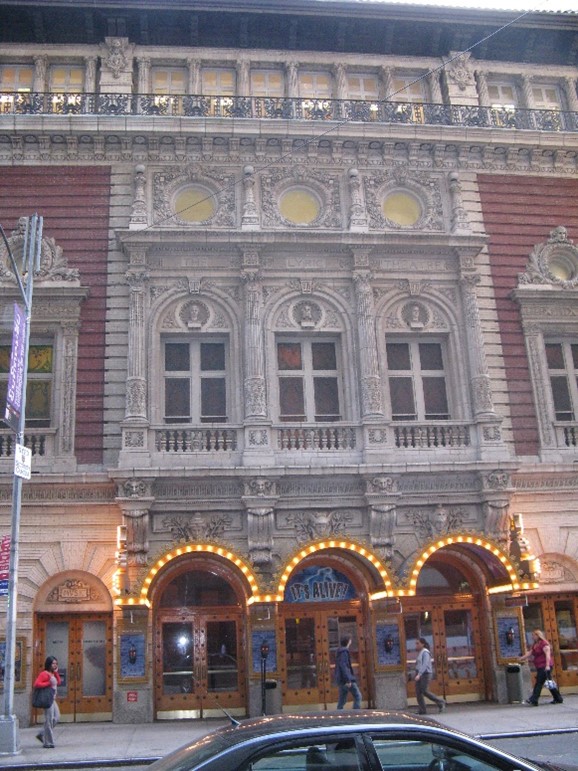 The Lyric was opened in 1903 by the Shubert Organization. It is a Broadway powerhouse boasting 1,829 seats. It has some of the best lighting and sound systems on the Great White Way and trains some of the best theatre staff on Broadway. To accommodate traffic flow, the Lyric has two entrances, with one heavily decorated and another that is lit up very well and looks quite modern. The inside of the theatre has two tiers of seating beyond the large orchestra section. They call their mezzanine a “dress circle.” Because of the substantially deep stage, this theatre allows for amazing visual effects that other theatres cannot accommodate. Spider-Man and Chitty Chitty Bang Bang were both able to use intensive “fly over the audience” mechanisms.