The Gershwin Theatre was built on the 2nd floor of a skyscraper (Paramount Plaza) in 1967 in Midtown Manhattan as a Broadway Theatre designed by Ralph Alswang. It was the first new theatre built on Broadway since 1928. It opened in 1972, as the Uris Theatre. Ralph Alswang designed the theatre to host large, musical productions, and boasts seating of 1,933 making it the largest capacity theatre present today on Broadway. There are escalators leading from the ground floor to the second-story lobby and rotundas. The American Theater Hall of Fame, which contains inscriptions of the names of over 500 notable theatrical personalities, is placed within the lobby and rotundas. 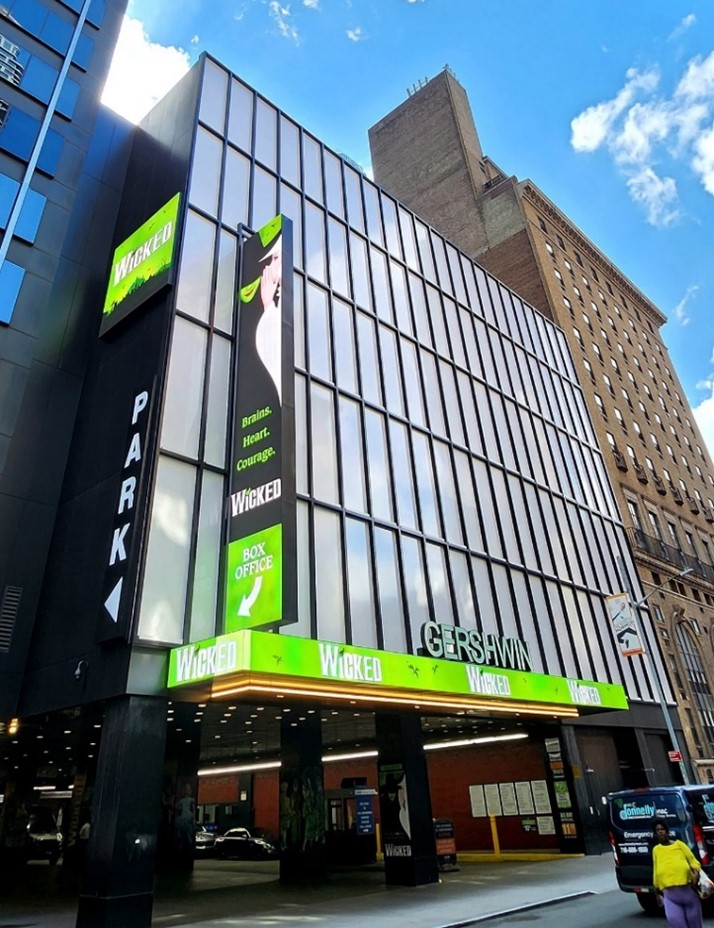 Street view of the Gershwin Theatre

Interior view from box seats in the Gershwin Theatre

In 1983, after The King and I and Sweeney Todd, starring Angela Lansbury, were huge Broadway musical successes, the Uris was renamed the Gershwin Theatre after George and Ira Gershwin, famous brothers who composed the music for many Broadway shows. Six Tony Awards ceremonies were hosted there. In the 1980s, the Theatre hosted concerts and musicals such as Singin' in the Rain, Starlight Express, Mame, and Cyrano de Bergerac. The Theatre produced Show Boat, Fiddler on the Roof, Grand Hotel and Camelot in the 1990s. It was renovated in 1993, then Candide, Riverdance, Oklahoma and Peter Pan among many others performed there. The Gershwin continues to be home to the musical Wicked since 2003.